COVID-19 has caused a substantial increase in the number in need and we anticipate that need to increase well into 2021. St. Vincent de Paul Detroit is committed to fulfilling these needs, just like we have done for over 134 years.

You can help us provide meals, clothing, shelter and warmth – basic needs that everyone deserves. Together we can offer hope to those who need it, and the assurance that someone cares.

Night at a Glance

Your sponsorship of the Top Hat Ball event helps provide much needed support to help us serve those who need it most in our community.

This Detroit native received his comedic break while studying at The University of Michigan.  Horace H. B. Sanders has combined his gifts of writing, improvisation and acting, while utilizing his unique perspective, to become a World Class Stand Up Comedian.  Horace has been blessed to bring laughter to audiences of all kinds across North America, The Caribbean and entertained U.S. Troops in Japan.  No matter the location; whether a sold out arena, church, corporate gathering, comedy club, university concert or TV production, Horace H.B. Sanders is guaranteed to deliver.

Horace is honored to be the reigning “CBS Star Search Comedy Champion” with a combined perfect score from live home audience and celebrity judges.  He has been featured on numerous networks including ABC’s “Detroit 187”, BET, Comedy Central, The Word Network and Pure Flix.  Horace is also co star of the critically acclaimed documentary “Funny”.   He performed in front of more than 40,000 people at Phillips Arena (Atlanta, GA) alongside Steve Harvey and The legendary Sinbad.

Horace has extensive experience as a radio personality and was the co-host of Angelo Henderson’s  “Your Voice” in Detroit, Michigan.  Within the last few years Horace expanded his voice into the world of storytelling and had his work featured internationally on NPR and “The Moth”. He was soon after snagged to tour with one of their main-stage shows where he was met with newfound success and appreciation.

The dynamic of Horace H. B. Sanders is the rare ability to generate fresh material so audiences don’t just like his performance one, but can love it, over and over again.  Never the same show twice!  They say that we are a product of whom we hang around with.  In that case it is no wonder that Horace is on his way to unprecedented success because he has worked with a plethora of artists from JB Smooth, Dave Chappelle, Bernie Mac, LeAnn Rimes, Anita Baker, Kevin Hart, Chris Rock, Aretha Franklin, to name a few.  Once you have seen  Horace  H. B. Sanders perform you will know why the H.B. stands for Hilarious Brother!”.

Stephen Henderson is host of Detroit Today and a Pulitzer Prize-winning journalist. A native of Detroit, Henderson is a graduate of University of Detroit High School and the University of Michigan. His resume includes stints at the Detroit Free Press, the Chicago Tribune, the Baltimore Sun, and four years covering the Supreme Court for Knight Ridder’s Washington Bureau. Henderson’s reputation and ability to have fact-based, fair and compelling conversations makes him a leading figure in the Detroit community.

Gregory Boyle is the founder of Homeboy Industries in Los Angeles, Calif., the largest gang intervention, rehabilitation and re-entry program in the world.

He entered the Society of Jesus (the Jesuits) in 1972 and was ordained a Catholic priest in 1984.  Father Boyle holds a bachelor’s degree in English from Gonzaga University, a master’s degree in English from Loyola Marymount University, a Master of Divinity degree from the Weston School of Theology, and a Master of Sacred Theology degree from the Jesuit School of Theology at Berkeley.

After ordination, Father Boyle spent a transformative year living and working with Christian base communities in Cochabamba, Bolivia.  In 1986, he was appointed pastor of Dolores Mission Church in Los Angeles.  At the time, Dolores Mission was the poorest Catholic parish in the city, located amidst two large public housing projects with the highest concentration of gang activity in Los Angeles.  He witnessed the devastating impact of gang violence on his community during the so-called “decade of death” that began in the late 1980s and peaked at 1,000 gang-related killings in 1992.

In the face of law enforcement tactics and criminal justice policies of suppression and mass incarceration as the means to end gang violence, Father Boyle and parish and community members adopted what was a radical approach at the time: treat gang members as human beings.  They sought to address the escalating problems and unmet needs of gang-involved youth by developing positive opportunities for them, including establishing an alternative school and day care program, and seeking out legitimate employment.  They called this initial effort Jobs for a Future.

“Gang violence is about a lethal absence of hope,” Father Boyle has said.  “Gangs are the places kids go when they discover their life to be a misery, and misery loves company.  It’s about kids who can’t imagine their future so they plan their funerals.  Hope is an essential thing.  Nobody has ever met a hopeful kid who joined a gang.”

In the wake of the 1992 Los Angeles riots, Jobs for a Future and Proyecto Pastoral, a community-organizing project begun at Dolores Mission, launched their first social enterprise in an abandoned bakery across the street from the church that Hollywood producer Ray Stark helped them purchase.  They called it Homeboy Bakery.

When his term as pastor of Dolores Mission ended later in 1992, Father Boyle spent his tertianship (the final year of Jesuit formation) serving as a chaplain at the Islas Marias Federal Penal Colony in Mexico and at Folsom State Prison in California.

Today, Homeboy Industries employs and trains former gang members and felons in a range of social enterprises, as well as provides critical services to thousands of men and women who walk through its doors every year seeking a better life.

Father Boyle is the author of the New York Times-bestseller Tattoos on the Heart: The Power of Boundless Compassion, which was named one of the Best Books of 2010 by Publishers Weekly and received the PEN Center USA 2011 Creative Nonfiction Award.  His new book, Barking to the Choir: The Power of Radical Kinship, was published in 2017.

The subject of Academy Award-winner Freida Lee Mock’s 2012 documentary, G-Dog, Father Boyle has received the California Peace Prize and been inducted into the California Hall of Fame.  In 2014, President Obama named Father Boyle a Champion of Change.  He received the 2016 Humanitarian of the Year Award from the James Beard Foundation, the national culinary-arts organization.

He was awarded the University of Notre Dame’s 2017 Laetare Medal, the oldest honor given to American Catholics.

Currently, he serves as a committee member of California Governor Gavin Newsom’s Economic and Job Recovery Task Force for the COVID-19.

On May 20, 1989, Bishop Hying was ordained a priest for the Archdiocese of Milwaukee.  His first priestly assignment was as a parochial vicar for St. Anthony Parish, Menomonee Falls, from 1989 to 1994. Fr. Hying served as a Team Member for La Sagrada Familia Parroquia in the Dominican Republic from 1994 to 1997. He returned to the United States and served as the parochial administrator of St. Peter Parish (1998), then as the parochial vicar of St. Anthony Parish, Milwaukee, from 1998 to 1999. He was then appointed the pastor of Our Lady of Good Hope Parish, Milwaukee from 1999 to 2005. In 2006, Fr. Hying served as the parochial administrator of St. Augustine Parish, Milwaukee.  He served as the Dean of Formation at Saint Francis de Sales Seminary from 2005 to 2007, and was appointed the rector of St. Francis de Sales Seminary by Most Reverend Timothy Michael Dolan, Archbishop of Milwaukee, and served in that capacity from 2007 until 2011.

On May 26, 2011, Pope Benedict XVI appointed Fr. Donald Hying the Titular Bishop of Regiae and Auxiliary Bishop of the Archdiocese of Milwaukee. He was consecrated a bishop on July 20, 2011 by Most Reverend Jerome Edward Listecki, Archbishop of Milwaukee.

Bishop Hying serves as the Episcopal Liaison for the National Association of Catholic Chaplains and as Episcopal Advisor to the U.S. Society of St. Vincent de Paul.  He is also a member of the United States Conference of Catholic Bishops’ Subcommittee to Aid the Church in Central and Eastern Europe and the Committee on the Protection of Children and Young People and the Committee on Catholic Education.

Kylee Mitchell Wells is the executive director of Ballmer Group’s philanthropic efforts in southeast Michigan, which are aimed at improving economic mobility for children and families disproportionately likely to remain in poverty.

Most recently, Kylee served as Senior Director – Detroit Market for the national nonprofit Enterprise Community Partners. She launched their Detroit office and created strategies to bring capital, programmatic, and policy/advocacy solutions to address the needs of low-and-moderate income neighborhoods.

Previous to that, Kylee worked with the City of Detroit to assist with the largest municipal bankruptcy in U.S. history. Kylee has also served as program officer, financial stability at the United Way for Southeastern Michigan. She has spent time in Washington, D.C., serving as a program director for Mayor Adrian Fenty, where she implemented Bank on DC, the mayor’s economic inclusion initiative which targeted low-to-moderate income populations in the District of Columbia.

Kylee has 10 years of combined experience in corporate finance with BOSCH-USA, General Motors Corporation, and the Detroit Regional Chamber. She received a Master of Public Administration from Baruch College – School of Public Affairs and a Bachelor of Business Administration and Finance from Davenport University. She is a National Urban Fellow, a Michigan Political Leadership Fellow, and was recognized by News/Talk 760 WJR as a 2018 “Woman Who Leads.” Kylee is an active community member, serving on a variety of boards and committees. 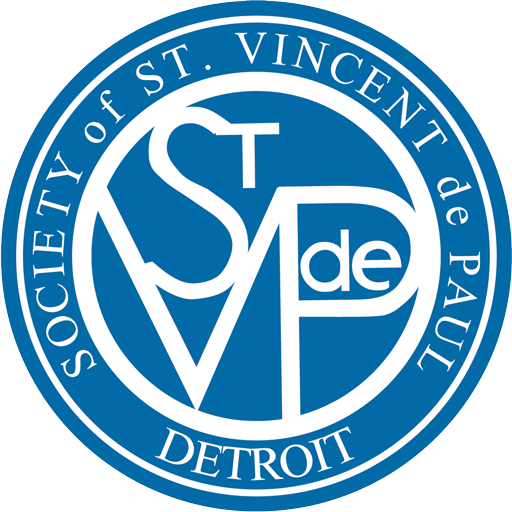 About the Society of St. Vincent de Paul Detroit

Bringing people of all faiths together, St. Vincent de Paul Detroit (SVdPD) strives to build a more just world through personal relationships with and service to people in need, empowering them at critical moments in their journeys, to help lift them from poverty towards a more stable path.

For over 135 years, SVdPD has heard and responded to the cries of Southeast Michigan’s most vulnerable, regardless of faith, race, ethnic or social background, health or gender. All are welcome at our door. We provide urgent material needs, health and wellness programs, hot meals, food, utility assistance, and a pathway out of poverty through our Like Skills programs – Journey to Housing and our Justice Initiative. We also offer free summer camp experiences for youth through Camp Ozanam. No act of charity is unknown to St. Vincent de Paul Detroit.

Assistance is provided through a local network of Vincentian volunteers who make in-home visits. These visits differentiate SVdPD from similar organizations and are at the core of what we do. With compassion, empathy, respect, and gratitude, our Vincentians nurture a one-on-one relationship to better understand and satisfy the spiritual, emotional and material needs of those we serve.

This our faith, every faith, at its best!

Last year, through the incredible generosity of corporations, foundations, and individuals, we were able to feed over 44,538, help 6,782 households keep their heat and lights on, and our Vincentians made 44,000 home visits. Overall, we helped 190,000 of our neighbors in need.

Your commitment to supporting the Top Hat Ball ensures people who need us the most, will continue to get the help they deserve.

“Do not be afraid of new beginnings. Be creative. Be inventive.” – Frédéric Ozanam

SEE 2019'S EVENT PHOTOS HERE
Login to Top Hat Ball
Reset Password
Enter the username or e-mail you used in your profile. A password reset link will be sent to you by email.